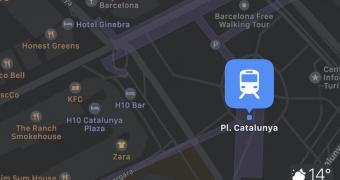 Apple has started rolling out Apple Maps transit direction for users in Europe as well, after the company originally released a major update for the service in the United States.

While transit features have been around for some time, this new update includes more countries and cities. For example, countries like Spain, France, Germany, and others are now fully covered by Apple Maps, albeit in some cases, the feature doesn’t include all public transportation services.

For example, while France also gets both regional trains and high-speed trains, bus lines aren’t yet available in Munich and Frankfurt.

One of the biggest changes in the Apple Maps update released in January includes real-time transit information, only available in the United States but supposed to go live elsewhere as well shortly – today’s update for Europe only brings extended coverage for public transportation without any real-time data.