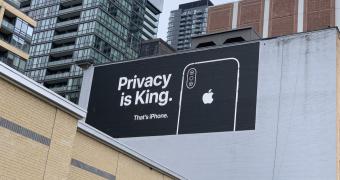 Apple has always positioned privacy as one of its top priorities, and the company is now trying to capitalize on this strategy with a new set of billboards.

The Cupertino-based tech giant thus uses pro-privacy billboards in order to highlight the capabilities of the iPhone, and the first such banners have recently been spotted in Canada.

One of the billboards reads that “Privacy is king” and comes with a slogan used on all the other banners that says “That’s iPhone.”

“We’re in the business of staying out of yours,” another such billboard reads. “Privacy. That’s iPhone,” it also adds, as iMore notes.

While Apple is pushing so hard for privacy, the company has often been criticized by other tech giants for using it as a selling point.

Apple CEO Tim Cook, on the other hand, emphasized that investing in priv… (read more)