Apple Is No Longer the Second Top Smartphone Company in Europe 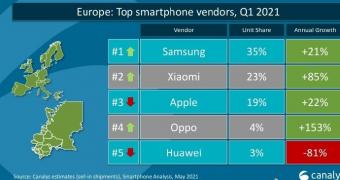 Apple’s iPhone 12 is selling like hotcakes, according to market analyst firms, but this apparently isn’t enough to help the Cupertino-based tech giant cope with the growth experienced by its rivals.

And new data shared by Canalys for the first quarter of 2021 in Europe shows that Apple has actually lost the second place in the top smartphone vendors charts, all following an impressive growth recorded by Xiaomi during the quarter.

More specifically, Samsung remained the number one phone maker in Europe with a 35 percent share and an annual growth of no less than 21 percent, but Xiaomi grew so much that Apple couldn’t cope with it. So Xiaomi is now the runner-up with a 23 percent share, all thanks to an annual growth that reached 85 percent in the first quarter of the year.

This is impressive, to say the least, with Xiaomi’s growth said to be reaching 89 percent year over year in Wes… (read more)