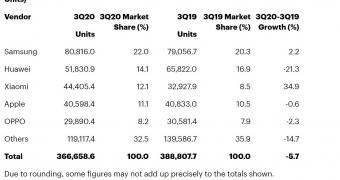 New data provided by Gartner shows that the smartphone market dropped 5.7 percent year over year in the third quarter of 2020, and it’s easy to see why.

With the world still struggling with the global health issue, few people were still interested in a new phone, and Gartner says the shipments dropped to 336 million units for the quarter.

There are signs of recovery, that’s true, but it’s pretty clear the phone market is far from returning to the pre-2020 levels.

The biggest change that happened in the third quarter of this year was Apple dropping to fourth place overall, as Xiaomi has managed to overtake its American rival for the first time.