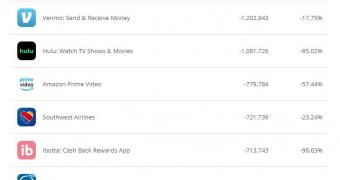 An App Store bug has caused the removal of more than 22 million ratings for iOS apps, with both small and big developers affected, including Microsoft and Google.

The bug wreaked havoc between October 23 and October 24, and it affected more than 300 app from over 200 developers.

The discovery was made by AppFigures and first reported by TechCrunch, with an analysis of the damage revealing that in some cases, apps lost no less than 95 percent of their ratings in specific countries.

For example, a total of 95 percent of the ratings that were published in the United States for Hulu got purged due to the bug, while Dropbox experienced a drop of approximately 85 percent in the number of reviews after the glitch kicked in.