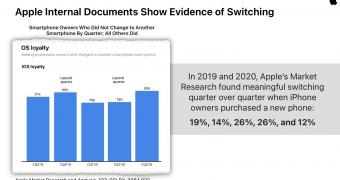 The Apple vs. Epic legal dispute reveals more and more interesting tidbits, with one of the most recent documents shared as part of the lawsuit concerning the number of iPhone owners who actually move to Android.

The data, which was published on Twitter by Ben Bajarin, CEO and Principal Analyst at Creative Strategies, was used by Apple as evidence that “choice does exist,” as some of its customers do end up making the switch to Google’s operating system.

The switching trends have increased and decreased several times, with the bi… (read more)